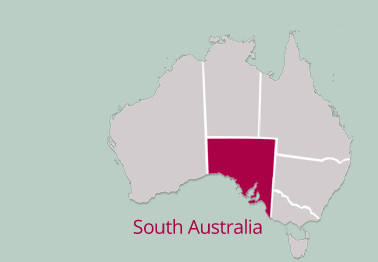 The Barossa Valley is probably the most familiar wine-producing area in the country, but it is joined by many others achieving excellence in South Australia. McLaren Vale, the Clare and Eden Valleys, Padthaway and, most prestigious of all, Coonawarra are all synonymous with fine red and white wines that compete with the best of the Old World whilst maintaining an identity all of their own.

Quantity, however, rubs shoulders with quality. South Australia produces about half of Australia's wine and, while the best will worry the winemakers of Burgundy, Bordeaux and the Rhône, the majority will not be disturbing their sleep. The Riverlands area near the border with Victoria and New South Wales produces wine on an industrial scale that is usually boxed rather than bottled though there are, of course, exceptions to be found.

Like much of south-eastern Australia the climate and conditions are so varied, and the winemakers so active and experimental, that the range of styles is immense.  Shiraz is traditionally the premier grape of the region, notably in the Penfolds Grange Hermitage, and can be extremely bold and seductive.  The best Cabernet Sauvignons are austere when young but open out with age, whilst Riesling and Semillon both make exceptional dry and sweet white wines.

South Australia is home to many massive corporations and big name brands churning out reliable wines year after year without much interest in character, but these huge operations will usually also own small wineries where wines are crafted with a great deal more finesse and sympathy.  South Australia is capable of being all things to all men (and women, of course).

Terroir, that indefinable influence so beloved by the French, has its adherents in the heart of South Australia.  The 'terra rossa' of Coonawarra, a loam soil that is red with iron, is credited with much of the character that the district can create in its wine.  Regarding the climate, much of the region would be too hot without the cooling influence of the Southern Ocean.  The Riverlands rely on large scale irrigation from the Murray River to be viticulturally viable.