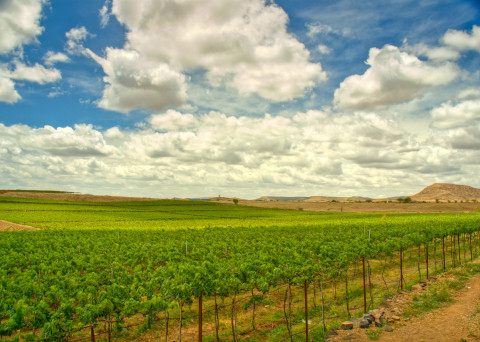 Indian wine consumption and production are in high growth, despite the general unsuitability of most of the country for conventional wine-growing. India's 60,000 hectares of vineyards produce about 1.6 million tons of grapes a year, of which only about 10% are used for wine.

The majority are used as table grapes and raisins, however a rise in domestic demand, investments in technology, adoption of international grape varieties and viticultural practices means that quality wines are on the rise.  Indian whisky is also growing in popularity globally, many brands widely available in the UK. Domestically produced Indian whisky is made with molasses and would be labelled as rum under the EU.

India is a diverse range of climates across its huge land mass, from arid desert land across Rajasthan, through to freezing alpine slopes of the lower Himalayas and the humid, subtropical regions in western India.

Western India accounts for three quarters of all wine production, the heart of which is the Nasik Valley.  Known as the 'Napa of India', this valley is considered to be amongst the most exciting new world wine regions to emerge in the last decade.  Nasik combines a tropical climate with cool nights, giving the vines respite from the  heat and protecting the delicate aromatics. In addition, unique, mixed soils and adoption of  new world varietals as well as popular indigenous varieties all help to contribute to the areas growing popularity. These wines are distinctive and are topped off by a spicy tropical edge.

Southern India accounts for approximately one quarter of all wine production, with the majority fortified in style.  This can be traced back to Portuguese settlers in Goa in the 1600's and is popular domestically.

Northern and Eastern India accounts for a tiny amount of wine production, mainly centred around the town of Champai.

Interest in Indian wine is likely to grow over the coming years as quality increases. Don't be tempted just to drink Indian wine with Indian food - the selection at Weavers match with a wine variety of cuisines!