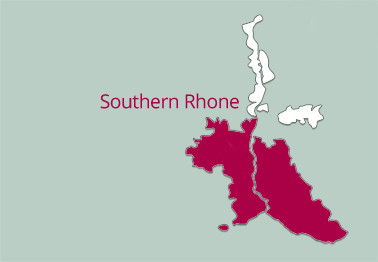 The Southern Rhône is dominated by two contrasting appellations: Châteauneuf-du-Pape and Côtes-du-Rhône.  The former is weighty and expensive, an esoteric blend of up to 13 grapes that is amongst the most famous and finest wines in the world (however spurious its papal connections).  The latter is a vast area of 40,000ha where cheerful everyday wine is pumped out for the masses.

Their coexistence sums up the variety on offer in this large and important winemaking area, where whites, reds, rosés and vins doux naturels (fortified sweet wines) are all produced for both quantity and quality. Gigondas, Lirac and Côtes du Lubéron are other notable appellations.

It is impossible to generalise about such a large and diverse district, but the top reds do not usually need to be aged for as long as those of the Northern Rhône and the whites should be drunk young.

It has a Mediterranean climate, and the heat is ideal for some of the grapes, but vineyards rise to 450m above sea level where the cooler conditions are more suited to others.  Hence the vast array of vines that are cultivated on land that is much flatter than the steep slopes of the Northern Rhône.  Summers are dry, winters are wet and cold, and soils are very varied.