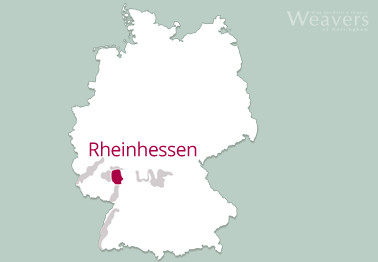 Liebfraumilch has coloured the reputation of German wines for the last 20 years and the Rheinhessen region is largely responsible for it.  This may make it a villain in the eyes of many, but it retains a large export market to this very day.

Germans rarely touch it, and the quality producers of the Rheinhessen have suffered enormously owing to its ubiquitous and questionable appeal.  This is unfortunate for them, though for the consumer it does ensure that the good wines of Nierstein, Nackenheim and Ingelheim along the Rheinterrasse are priced well below their merits.

In the mid-20th century the Rheinhessen began to exploit the weaknesses of the German classification system.  By planting and harvesting high-yielding, reliable vines that were lower-quality crosses of more celebrated varieties, the must weights necessary to satisfy the law were achieved.  In other words, the sweetness that once had been an indicator of quality had now become more easily and cheaply achievable.  The region has never managed to shake off this reputation, and Liebfraumilch was certainly not the wine to do it.  This is sad, because a gamut of styles are produced to an admirable standard.

Portugieser, Spätburgunder (Pinot Noir) and Dornfelder are red vines that are present in the Rheinhessen, but it is the white wines that are predominant.  A remarkable range of grape varieties is planted: Müller-Thurgau, Kerner, Scheurebe, Bacchus and Faberrebe are all present, but Riesling and Silvaner are widely considered to produce the best results.

With an emphasis on bulk rather than quality production, the climate and conditions of this region are not so critical as elsewhere this far north in Germany.  The exception to this is the Rheinterrasse, a strip along the curve of the Rhine, where the warmth of the river allows for ripening of the quality grape varieties in much the same way as in the Rheingau region.  The harvest is usually mechanised, which causes much debate about the uglification of the countryside, but it does ensure that costs are controlled.