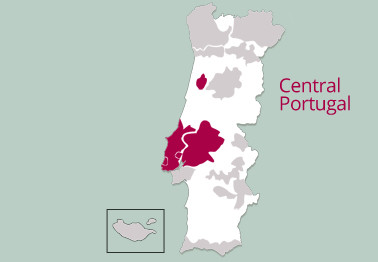 Long seen as a land of missed opportunities, the co-operative came to hold sway in Central Portugal and has, for the most part, resisted the modernisation and development required to progress from quantity to quality.

The very large Oeste and Ribatejo districts epitomise this, producing vast amounts of undistinguished wine to slake the thirst of the local population.

In certain areas winemakers are beginning to wake up to the potential they have. In the Dão and Bairrada DOC areas, a new wave of producers has bypassed the co-operatives and is striving with some success to craft wines that are interesting and exciting.

Dão can deliver red wines with the depth and spice to match anything Portugal can produce elsewhere, and those of Bairrada are assertive and luscious when made with finesse. All too often, however, application is lacking and both produce much that is lacklustre. Whites, both still and sparkling, are in the minority but capable of good results. Little of either the good or the bad makes its way to the export market. The more familiar sweet, pink Mateus Rosé is a product of Bairrada.

Bairrada relies on the Baga for its red wines and Maria Gomes and Bical for its whites. Nine red grapes are allowed for the wines of Dão, including Touriga Nacional, Tinta Pinheira and Bastardo, whilst Encruzado and Bical contribute to the whites. The curiously named Esgana Cão, meaning 'dog strangler', is a white variety used along with Arinto to good effect in the Bucelas DOC near Lisbon.

This region, between the Douro to the north and the Tagus to the south, is exceptionally productive agricultural land. It bathes in rain and basks in sun and erupts with a variety of crops. Grapes are amongst these, though they often produce disappointing wine in such benign climates and Oeste and Ribatejo are testimony to this. The viticulturists of Dão and Bairrada have to work a little harder and consequently their grapes, grown in granite and clay based soils respectively, have rather more life and personality.