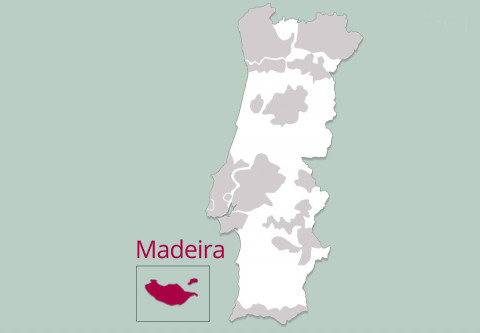 Madeira must have the most improbable history of any wine in the world. The island was discovered by Zarco the Cross-Eyed, a Portuguese sailor, in the early fifteenth century and within thirty years the vine had been introduced from Crete.

Conveniently sited in the Atlantic Ocean, Madeira became a watering hole and supply depot for those exploring and trading around the world.

The wine, as with Port, was fortified to preserve it at sea but something remarkable occurred. As it travelled to India the stresses and strains of the voyage, especially the heat, seemed to elevate the quality of the wine to a startling degree. This was so pronounced that during production on the island the winemakers began to bake it in order to replicate these conditions. There is little doubt that Madeira is unique.

There are four distinct styles and five grades of quality. From the driest to the sweetest, Sercial, Verdelho, Bual and Malmsey (a butt of which Shakespeare's Duke of Clarence was drowned in) are the styles, and age will determine how fine they will be. Over three-quarters of Madeira is a mere three years old and deemed good enough only for cooking. The other categories, of escalating quality, are five-year-old reserve, 10-year-old special reserve, 15-year-old extra reserve and Fresqueira 20-year-old vintage.

Tinta Negra Mole is the predominant grape, mainly for its high-yielding habits, and is regarded as inferior to the four noble grapes that are grown on the island. These are Sercial, Verdelho, Bual and Malvasia (for Malmsey) and each has its own special style. A wine labelled as one of these must contain, by European law, 85% of that grape variety.

Two factors in particular affect viticulture in Madeira: topography and soil fertility. The island is mountainous and vines are grown on terraces where mechanisation is simply impossible. Hand harvesting is required and this is easiest for the high-yielding Tinta Negra Mole vine. The soil is extremely fertile and this is down to the early Portuguese colonists.

The name Madeira comes from the Portuguese for wood, and when they arrived the island was heavily forested. They cleared most of it, however, in a vast slash-and-burn and the ash this created is still feeding the vines. The steepness of the slopes, therefore, is offset by the productivity of the soil.