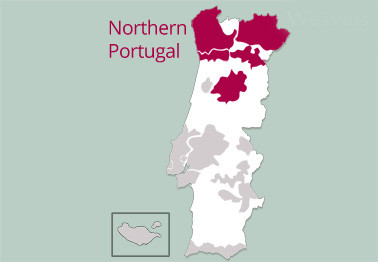 Northern Portugal is the home of Port, most famous of all the world's fortified wines, and it is unsurprising that this marvellous drink steals attention away from the other fine and unusual products of the region. In recent years the wines of the Vinho Verde and Douro districts have emerged from the shadows to become recognised and appreciated on the international market.

Port has a plethora of styles and an essay could be written on each and every one of them. It can be ruby, tawny, crusted, white, a late-bottled-vintage or, the ultimate accolade, vintage. All share the fact that fermentation is stopped unnaturally by the addition of brandy (one part to every four-and-a-half of wine) and they therefore retain an element of sweetness.

Time is spent in wooden casks and the nature of this will largely determine the style. The grapes for Port are grown in the Douro, where dry red and white wines are also produced. The reds have achieved the greatest results,often being dark, rich and approachable. The Vinho Verde region also produces red and white wines, but it is the whites from this district that are internationally known. They should be drunk young, when still fresh and retaining the slightest of sparkles.

Something in the order of 80 grape varieties are permitted in Port, and the Douro has around 100 vines that continue to thrive.  Aside from plantings of Cabernet Sauvignon, these are almost exclusively indigenous.  Tarrango, Tinta Roriz, Tinta Barroca, Touriga Nacional and Touriga Francesca are all red grapes, whilst Malvasia and Viosinho can be found in white port.  Vinho Verde can also draw on many different vines and, when white, Loureiro, Trajadura and Alvarinho are frequently used.

The Vinho Verde district has a great deal of rainfall and the productive vines are often raised on trellises to combat the dampness. It is this moisture that gives the wines their freshness. The Douro is very different, being hot and dry and apt to produce intensity and the potential for ageing in the grapes that it grows.