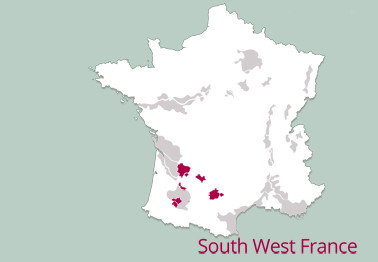 The South West of France is largely overlooked as a winemaking region, but this is grossly unfair for a number of reasons.  It has a very fine culinary tradition that can only be complemented by good local wines; it maintains a suite of indigenous and interesting grapes; it was influenced by Bordeaux and produced fine enough wines to be part of the trade of that town before legislation forbade this; and the winemaking regions ...

within the South West are widely scattered, fiercely individualistic and all the more appealing for it. Cahors, Bergerac and Monbazillac are the pre-eminent appellations, and the Vin de Pays des Côtes de Gascogne is a large, important and very good value source of everyday wine. Armagnac is a product of this region.

The scattered winemaking districts of the region, with their varied influences and indigenous grapes, have created a wide range of styles that they vehemently cling to.  The South West has not been overrun with international grape varieties and standardised methods.  The whites can be sparkling, crisp or sweet, the reds as soft or as tannic as you happen to fancy.  There is something for everyone in this traditional and beautiful part of France.

Cabernet Sauvignon, Cabernet Franc, Merlot, Sauvignon Blanc. Muscadelle and Sémillon came down from Bordeaux and remain of vital importance, as does Malbec, which is the key vine in Cahors and known there as Auxerrois or Cot.  Carignan, Syrah and Grenache have come in from southern regions of France and Chardonnay has achieved a foothold.

Many indigenous grapes are alive and well and worth searching out.  Tannat and Duras are both red and Arrufiac, Petit Manseng, Gros Manseng and Petit Courbu are amongst the whites.  Colombard was once primarily used for the distillation of Armagnac but has emerged as a wine grape in its own right.

These vary greatly over the region.  Some districts, such as Bergerac, have a cool maritime climate similar to Bordeaux, others are influenced by the Pyrenees, and Cahors is equidistant between the Atlantic and the Mediterranean and susceptible to the whim of both.  One feature common to much of the region is the danger of hard spring frosts.

Soil type is extremely varied, even within individual districts.