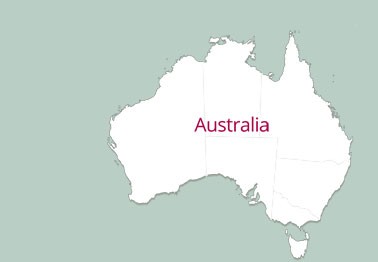 In wine, as in sport, Australia takes no prisoners.  Their influence on modern winemaking is without measure as Australia has raised the benchmark for the quality and changed old perceptions of wine across all price levels.

It is believed wine vines arrived with the first fleet of British colonisers in 1788 though it was James Busby, a Scotsman, who in 1824 took a detailed collection of French and Spanish vine stock to Australia.

By the 1830s the main regions of today were producing wine and by the end of the century there existed an export market to Britain, mainly for fortified "Empire" wine. Eventually immigration, particularly from Italy and Greece, saw local demand for table wine develop the industry.

In the late 19th century Phylloxera, a vine-munching bug, ate its way through Victorian and New South Wales vineyards though largely left South Australia alone and so it has achieve a wine pre-eminence it has not since relinquished.

No classification exists though a Geographical Indication (GI) system was introduced in 1994 to help identify each wine based on the state, zone and region the grapes were grown. Effectively if a GI appears on the label then 85% of the grapes in the bottle must have been grown in that GI. While some wines can still be labelled as 'South Eastern Australia', for more specific regions such as the Barossa Valley and Margaret River the GI is much more relevant and helpful in determining terrior influences.

Also by law the designated grape varieties on the front label must make up 85% of what is in the bottle, while the back label must identify 95% of the grapes used.

This system does not restrict what grapes are grown in any region nor does it monitor wine quality, unlike similar laws in Italy or Spain. But encouragingly the GI system does give the winemaker and grape grower more freedom in production and helps them to try new and potentially brilliant ideas.

The result is that it does require the wine buyer to know their wines, or at least ask a merchant for a little advice, to be sure to buy good quality wine.

The perennially sun-kissed image of Australia might not quite be as accurate as its tourist board portrays, but it does possess a climatic consistency that Europe is lacking and there is enough diversity in this huge country to suit different grapes and imbue them with character.  New areas, with differing climate and conditions, continue to open up as the industry expands and it is only the difficulty of irrigation that stems the expansion.

In the 1970s the modern wine industry of Australia was born.  Cutting-edge techniques, experimentation, and accessible labelling came to the fore and the world beyond Britain suddenly realised what the country could do.  The export market boomed and the industry has never looked back.

Australian wine is filled with every type of producer: huge corporations, boutique hand made wineries, and newcomers blazing a trail towards the next great style.  It has achieved consistency whilst retaining value for money and forever an enterprising fun loving spirit.