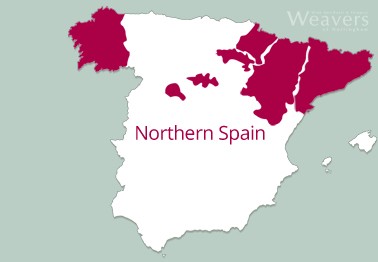 Primarily known for the fine red wines of Rioja and Ribera del Duero, these two attention-hogging stars are merely a part of the abundant riches that Northern Spain has to offer.  Tempranillo is the grape that forms the backbone of both, but this region has a wealth of indigenous grapes and has successfully imported international varieties.  Galicia, Navarra, Aragón and Catalonia stretch from the west to the east of the region, from the Atlantic to the Mediterranean via the foothills of the Pyrenees, and the wines they produce are as varied as their climate, topography and local cuisines.

Rioja and Ribera del Duero produce some of the world's finest red wines and are strictly regulated.  The terms joven, crianza, reserva and gran reserva refer to how long the wine has been aged before release - in oak barrels and the bottle - and each has a markedly different style.  Cava is produced in various pockets throughout Spain but the bulk comes out of Catalonia in the north.  The Cava wineries are very modern but use the same traditional techniques as Champagne.  Navarra is well known for its rosés and Galicia is the home of excellent whites that go perfectly with the seafood of the district.

International vines such as Chardonnay, Cabernet Sauvignon, Sauvignon Blanc and even Gewürztraminer have all been successfully grown in Northern Spain, but it is the traditional grape varieties that hold the greatest interest.  Tempranillo is the star, but Garnacha, Cariñena (known as Grenache and Carignan in France) and Graciano are other marvellous reds and Albariño, Godello and Viura are whites that are capable of greatness.

The region is wide and diverse, hence the variety of wines. Weather coming in off the Atlantic is the influence on Galicia, whilst the warmer Mediterranean holds sway over Catalonia. In-between these two districts there's more variety still, especially in height and temperature, and conditions will vary vastly from one year to another.  The wines of Ribera del Duero, for example, will be predominantly Tempranillo in drier years but Cabernet Sauvignon when it is wet.  Other than to say that they allow for excellent wines, it is impossible to generalize about the climate and conditions of Northern Spain.