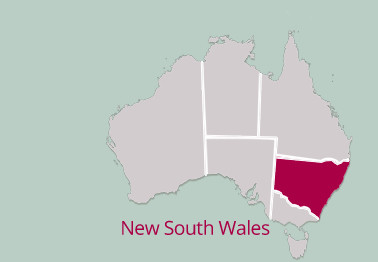 Australia has no native vine of its own and Sydney in New South Wales was where the very first imported example was planted in 1788.

From there, in Governor Phillip's garden, the vine has spread around the country and thrived but New South Wales remains an important winemaking region.

Today, the region accounts for around a third of Australia's total wine production, despite a climate that should shrivel the grapes to a raisin as they grow, and in the Hunter Valley has a top-class district that crafts, in particular, Semillon like nowhere else in the world.

In the Hunter Valley, Semillon is a dry wine with the ability to age for up to 30 years into a rich and minerally delight and Shiraz can also mature beautifully into luscious complexity.  Semillon is also used to good effect in the otherwise undistinguished Murrumbidgee district (until recently known as the unpalatably titled Murrumbidgee Irrigation Area and part of the bulk-producing Riverina zone where New South Wales, Victoria and South Australia all meet) where it produces a sweet, botrytized wine.

Good everyday wines come out of the Mudgee and Cowra districts from a number of grape varieties.

Semillon is the star, followed by Shiraz, Chardonnay, Merlot and Cabernet Sauvignon.

New South Wales should be far too hot for viticulture and, to compound this, the rain comes down hard at all the wrong times.  It often pours - with the exception of Murrumbidgee, which once advertised its pressing need to be irrigated - when the grapes are ready to be harvested and this can be destructive and bothersome.  Vineyards are increasingly being sought out to the west of the Great Dividing Range, where there is more protection from both the sun and the rain.

The Hunter Valley relies on moisture in the air, from sea breezes and high humidity, to keep its grapes from suffering.