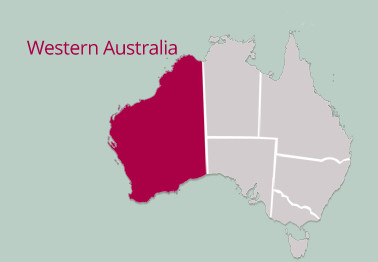 Western Australia has the country's oldest winery and the newest wine industry.

The Olive Farm Winery (built in 1829 - the year the west was first settled by the British and the vine arrived) is now of only local interest, but the produce of the region most certainly is not.

With the recent realisation that cool weather climates like the Margaret River, south of the traditional winemaking district of the scorching Swan Valley, were ideal for the growing of vines came the creation and subsequent growth of internationally celebrated wines.Western Australia, in common with New Zealand, is a minor player in terms of bulk but has carved out a niche when it comes to fine wine.

Margaret River is the most famous, but Frankland River, Mount Barker, Manjimup and Pemberton are also celebrated winemaking districts.

Varietals of classic grapes and trusted Old World blends, such as Cabernet Merlot and Semillon Sauvignon, have formed the basis for the wines of Western Australia but lesser known vines have been experimented with to great effect.  Allied to the fact that the region is cool compared with eastern Australia, resulting in wines that are often more subtle and elegant, this has created a wine industry mature beyond its years, confident in its product and a delight to behold.

Cabernet Sauvignon, Merlot, Shiraz, Pinot Noir, Chardonnay, Sauvignon Blanc, Semillon and Riesling have all done well in various parts of the region, but they are not alone.  Zinfandel has made a splash, whilst Grenache and Mataro (known as Mourvèdre in its native France) for red wines and Marsanne and Roussanne for whites have come from the Rhône and expertly been blended.

The Swan Valley is hot and has never been able to produce great wines with which to seduce the world.  Further south it is a different story.  Around the Margaret River, which empties into the southern extremity of the Indian Ocean, and the Frankland River, which loses itself in the westernmost extent of the Southern Ocean, these great bodies of water help create a cooler and more conducive environment for viticulture.  The inland areas of the far south are also cool enough to be productive.