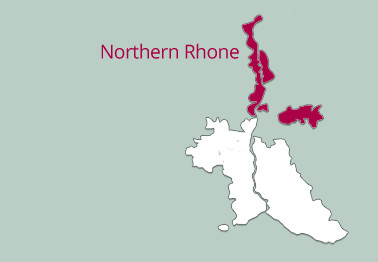 There is some debate about whether Syrah is an indigenous grape or was brought to the Rhône Valley from Persia, but there is no disputing that it is very much at home here. In the Northern Rhône it reaches its apogee and its finest wines were once as highly regarded as the Grand Crus of Bordeaux and Burgundy.

Tasting them was an integral part of the Grand Tour undertaken by the rich and cultured in the 18th century. War and disease,...

sadly, knocked the stuffing from this small, steep district in the 19th century and it was slow to recover. It was slow, but got there eventually, and now the wines of Hermitage, Condrieu and the Côte Rôtie are once again amongst the finest in the world.

Syrah is the only red vine permitted in the Northern Rhône, but owing to the varied topography and soils of this small area, and the way it is sometimes blended with white varieties, it can produce a remarkable number of styles, from the light and accessible to the parchingly tannic.  Hermitage is powerful and demanding of ageing, the wines of the Côte Rôtie are more supple and approachable, and every appellation has its own traits.

Viognier, Marsanne and Roussanne are the three white grapes allowed.  They are sometimes blended into the reds for elegance and aroma, but they are also made into white wines.  Viognier, especially in Condrieu, is capable of greatness and longevity.

Space is extremely limited in the Northern Rhône and many of the vineyards seem death-defying in their steepness.  This is their curse, but also their blessing, for the soil is well drained and the sunlight, not always plentiful this far north, can be efficiently captured.  The soil types and bedrock are very varied and are described in more detail under the specific appellations.

1988 was considered the vintage of the century, and there have been few disappointments in the 20 years since.  Nineteen-ninety-nine and 1995 were excellent and the 21st century has been consistently good.