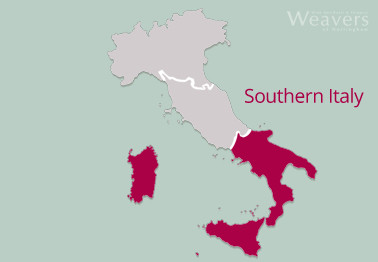 Known as Oenotria to the Ancient Greeks and Romans, this 'Land of Vines' made little progress between then and the latter stages of the 20th century. Neither the will nor the investment were there to achieve anything other than mediocre wines, but this began to change in the 1980s and Southern Italy's wealth of indigenous grapes began to come to the fore.

Primitivo might have gone largely unnoticed had it not been for the recent supposition that it was in effect the same grape as the Zinfandel of California; however, this now appears not to be the case. Nevertheless, it is beginning to shine in Italy as well. This is a region where quality is in the ascendant and greatness is waiting.

Southern Italy is a very large region with a remarkable number of grape varieties, and as such the styles of wine are legion. 'Mediocre' used to be a useful word for the description of them all but recent years have seen pockets, and now districts, of genuine quality emerge.

Primitivo is destined to be an important future grape for the region, especially Puglia.  Other significant red vines are Aglianico, Gaglioppo, Negroamaro, Malvasia Nero and, in Lazio to the north of the region, Sangiovese, Montepulciano, Merlot and Cabernet Sauvignon.The whites are regarded as being of less interest, though Trebbiano is used to produce the remarkably named, unremarkable tasting Est!Est!!Est!!! DOC wines and is blended with Malvasia for Frascati.  Sweet wines are made from Moscato in Basilicata and dry whites from Bombino Bianco in Apulia.

Grapes are grown from coast to mountain in this large region of Italy, as they are elsewhere in the country, and generalisations about climate and conditions are impossible to make. A closer look at the districts will yield the specific information about each.