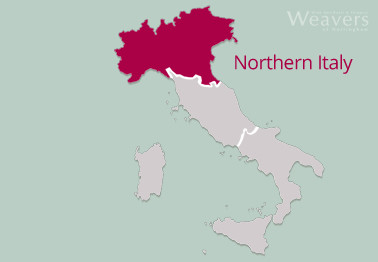 Northern Italy includes Piedmont, Veneto and Lombardy within its scope and offers a selection of the finest wines to be found in the world and plenty of excellent everyday drinking.

Barolo and Barbaresco, both produced from the Nebbiolo grape, and Valpolicella are legendary red wines whilst Gavi and Soave are whites of international repute. Variety is vast, as is quality, but with a little understanding it is an incredibly rewarding winemaking region to explore, and one that will satisfy all budgets and occasions.

Long-lived, complex Barolos and powerful Valpolicellas, both red wines, may fly the flag for the region but Northern Italy is predominatly a producer of crisp whites from mainly indigenous grapes, such as Gavi and Soave, and also has a world-famous sparkling wine. Asti Spumante may suffer from a problem of image, but when approached young its low alcohol and sweet fruitfulness can be uplifting. The styles throughout Northern Italy are extremely varied and a closer look at the districts will reveal more about them.

Nebbiolo is the noble grape of Northern Italy, used for Barolo and Barbaresco,other red grapes of importance are Barbera, Bonarda and, for Valpolicella, Corvina, Molinara and Rondinella. Cabernet Sauvignon and Merlot are international varieties that have achieved some success.For the white wines, Garganega is the main grape for Soave, Cortese for Gavi and Moscato for Asti Spumante.  Chardonnay and Sauvignon Blanc have taken root and a host of indigenous grapes produce everyday wines.  The uninspired Albana is maybe the most interesting of these, if only because the classification of Albana di Romagna as a DOCG wine was so controversial that it led to a complete overhaul of the classification system in 1992.

The vineyards are generally found in the foothills of the Alps and the Apennines.These make for challenging ripening conditions that bring out the best in many of the vines. South-facing slopes are favoured to take full advantage of the sun, though beyond this it is hard to generalise about such a large region.