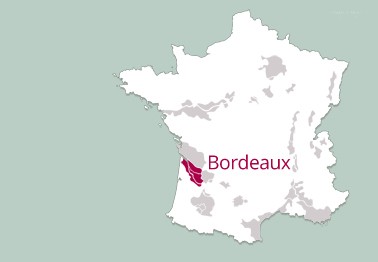 Nowhere in the world has inspired more praise, imitation and confusion than the wine-growing region of Bordeaux. To some it is sacrosanct, to others impenetrable, but all must acknowledge its fundamental importance.

Bordeaux crafts the world's greatest wines from the planet's most famous estates, but with over 100,000 hectares under vine (more than many a winemaking nation) it also produces a vast amount of everyday wine at affordable prices. It is divided into the Left Bank, the Right Bank and the Entre-Deux-Mers and within these are such famous areas as the Médoc, St-Julien, Graves, St-Émilion and Sauternes. It is famous for its red wines, but its sweet whites are excellent and its dry whites of note. Bordeaux, quite simply, is a place like no other.

It is long, and of course complex, and the British play a significant part.  When the future Henry II married Eleanor of Aquitaine in 1152 he knew he had made a good deal, but even he could not have foreseen the remarkable long-term benefits of the union.  For she came with Bordeaux as a dowry and a trade was established that has very rarely lapsed.  Wine flowed in to Britain, aided by tax breaks, and the region was established as a winemaking giant.

It was not until the 18th century, however, that the fine wines we know of today came into existence.  Affluence brought this about: in the British aristocracy, the French winemakers and the several nationalities of merchant who set up in Bordeaux.  Claret, as Bordeaux was known in England, became a status symbol and the demand for ever more quality was created and fulfilled.  Much the same situation exists to this day.

Bordeaux, both red and white, is a blend and therefore remarkably varied.  Most of the wine, and almost all of the great, is red.  As a rule it is softer and subtler than New World equivalents and has the structure to complement rather than clash with a wide range of foods.  Yet in such a diverse region this is a gross generalisation.  Pauillac and St-Julien, for example, may be adjoining but at the top of their game they are incredibly different and individual appellations have their very own character.  The sweet whites of Sauternes and Barsac are amongst the finest dessert wines to be found in the world.  Though the dry whites are comparatively undistinguished, they are eminently drinkable and occasionally capable of excellent ageing.

The Bordeaux Classification lays down the law.  Cabernet Sauvignon, Merlot, Cabernet Franc and, to a lesser extent, Malbec and Petit Verdot are blended in the creation of reds and Sémillon, Sauvignon Blanc and Muscadelle (though predominantly the first two) are combined for the sweet and dry whites.

To put it simply, Bordeaux has a mild and stable climate of no extremes.  Elsewhere in the world this might result, each and every year, in dull generic wines.  Bordeaux does not work like that.  The topsoil is basically poor, which is generally advantageous to vines, and beneath it is a mosaic of very different bedrock.  This allows for great variation, though as yet science has been unable to pinpoint why even neighbouring properties can be so contrasting in quality and character.  In a nutshell, terroir is all-important, and terroir is inexplicable, and that is just the way the French like it to be.  The mystery is all part of the appeal.