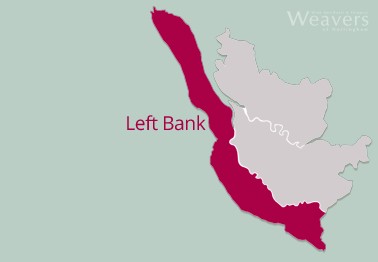 The Left Bank refers to the famous wine-producing areas on that side of the Garonne River as it flows down to join the Gironde Estuary and the vast Atlantic Ocean.  The Médoc, Margaux, Pauillac, St-Julien, Graves and Sauternes are names that are known and revered around the world, and here they all cluster together with the city of Bordeaux in their midst.

The Left Bank may now have to watch the urban sprawl nibble away at its vineyards, but it was Bordeaux that ensured its initial and enduring fame.  It was the port from which exports thrived, notably to Britain, and the district has never looked back.

Each appellation has its own style but the best red wines, with the exception of Listrac-Médoc, have Cabernet Sauvignon at their core. The soils of the Left Bank are predominantly gravelly and perfectly suit this noble grape. Merlot, Cabernet Franc and Petit Verdot make up the rest. Firm, well structured and complex wines are the intended and usual outcome.

Gravelly soils, an altitude of below 100m above sea level and the influence of the Atlantic Ocean unify the vineyards of the Left Bank, but localised conditions can vary enormously. The importance of terroir, that magical mixture of all the natural conditions, can hardly be more worshipped than in the region of Bordeaux. Individual appellations need to be investigated for more detail, but it is true to say of them all that climate has an enormously influential effect on the quality of each vintage.